JUDGE’S COMMENTS:
“With brush strokes as deft as a calligraphy character – writing as assured as the trajectory of an arrow loosed in flight and heading for its target, this time-slip story of a meeting that never should have happened (or should it?) made elaborate knots of my mind, and, ultimately, filled my heart with joy. Accessible, well crafted, beautifully paced, and suffused with respect for the natural world, I found it brim full of wisdom, humanity, and gentle observation. I loved the wrinkle-in-the-universe physics of it, too – a nod to The Man In The High Castle, or perhaps Interstellar. With tangential messages about attending to one other and also to the moment, looking after people who may be finding reality difficult, and knowing that things will pass, THE ARROW GARDEN feels like a novel for the times. I read it pretty much holding my breath, marvelling at the controlled release of tension in a story which is all about letting go. Just wonderful.”
2020 JUDGE, LITERARY AGENT JENNY SAVILL 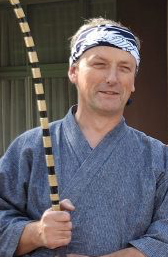 Andrew J King has a BA in English Literature and Fine Art and spent his early career as a professional designer. After taking an MA in Visual Culture he began a second career teaching Art and Design and is particularly interested in the links between images, emotions and words.
A Kyūdō archer and lifelong Japanophile, Andrew has assisted at Shintō ceremonies in shrines and temples across Japan. The Arrow Garden was inspired by his love for Kyūdō, Shintō ‘stories’ and the aftermath of 2011’s Great Tōhoku Earthquake.
Read the opening of The Arrow Garden
INTERVIEW: Andrew J King on winning, accepting representation with Jenny Savill and how he wrote his winning manuscript

Charlotte Leonard studied Law at the University of Warwick before embarking on a career in advertising. She had always dreamed of writing a book but after giving birth to three sons discovered that the only thing she had time to write was the occasional shopping list. Charlotte waited until the boys were all old enough to use a toaster and then started her novel as part of The Faber Academy’s ‘First 15,000 Word’ course. She finished the first draft at her kitchen table the day before lock-down began.

As the only woman in a house of males the issues that impact specifically on men have become incredibly important to her. Male suicide is shockingly the leading cause of death in men under 50. Realising just how many of her family and friends had been affected by the issue she decided to write about a woman who survives this very complex type of loss. Charlotte is currently working on a final draft of the manuscript and is represented by literary agent Jane Finigan at Lutyens & Rubinstein.

Read the opening of Afterwards

JULIA RAMPEN for The Cocklers

“An evocative, weather-lashed story of an unlikely duo, raising urgent questions about how we treat those who seek refuge. Painful and hopeful in equal measure.”

Julia Rampen was born in Edinburgh, Scotland, and spent much of her childhood writing (her proudest achievement as a seven year old was 77 pages about a family of seagulls). She moved to London to become a journalist and worked at The Mirror and New Statesman among other publications, before moving to The Liverpool Echo. She was a Foyle Young Poet 2005 and 2006, and she was the co-founder of the Syrian stories blog Qisetna: Talking Syria.

For many years, a regular date in Julia’s calendar was a trip to Morecambe Bay, where her grandparents lived. The 2004 cockling disaster seemed at odds with the quiet, sleepy place she knew, even though she had grown up with stories of the bay’s shifting sands. A decade or so later, she started writing a short story about the aftermath, and found it refused to neatly end. Her research led her to the undercover reporting of Hsiao-Hung Pai and the elegiac memoir of Morecambe Bay’s guide, Cedric Robinson, as well as an afternoon watching the cocklers come in from the endless sands.

Read the opening of The Cocklers

ROBIN FALVEY for The Dove

“Surprising, touching and ultimately uplifting exploration of the effects of trauma, written in an utterly refreshing, epistolary style.”

Robin Falvey is a sea swimmer, surfer, and former surf lifesaver who, in 2007, switched his IT job for more ‘hands-on’ technology, moving to New Zealand to work on the 19th century-rigged tall ship Soren Larsen.

After sailing the Southern Ocean and South Pacific, and making a radio documentary about his experiences, Robin returned to the UK to take an MA in journalism. After a stint as a sports reporter for BBC Radio Cornwall, he took to copywriting and writing writing. Robin’s first book, Fulmar, was shortlisted for the Bath Novel Award 2015; his second novel, Sacrifice, was shortlisted for the Bath Novel Award 2019. The Dove is a funny, heart-breaking and ultimately hopeful novel with a distinctively Cornish flavour.

Read the opening of The Dove

“With forensic attention to detail, the reader is effortlessly drawn into the small town, rural Australian setting and a community in mourning. Immersive and riveting.”

Shelley Burr is a crime fiction writer from Canberra, Australia.
Wake is her first novel. It was inspired by a fascination with true crime and online amateur crime-solving communities. Wake looks at what can happen when people’s private tragedies become public property, and the ripples of trauma that follow violent crimes.

Wake has been developed with the support of the Australian Capital Territory Writer’s Centre HARDCOPY program 2018, and the 2019 Kill Your Darlings Varuna Fellowship.

Read the opening of WAKE

MÓNICA PARLE for The Glass Girl

“We were transported to Mexico in 1913 where a tense murder mystery sets the story off in the most exciting way. The writing is evocative, authentic, rich in details and evokes ranch life brilliantly.”

Mónica Parle was born in the Chihuahuan Desert, which she still considers the home of her heart. She grew up among the bayous and roller rinks of suburban Houston, and now lives in London. She is currently the National Poetry Day Manager for Forward Arts Foundation and was previously Executive Director of First Story. She has two novels in progress: The Glass Girl, and a YA climate-themed adventure novel, which was Highly Commended in Faber & Faber’s 2018 FAB Prize. She participated in the inaugural year of the London Library’s Emerging Writers Programme 2019-20.

Read the opening of The Glass Girl here

submissions openJune 1, 2022
7 days to go.
My Tweets
We use cookies on our website to give you the most relevant experience by remembering your preferences and repeat visits. By clicking “Accept”, you consent to the use of ALL the cookies.
Cookie settingsACCEPT
Manage consent

This website uses cookies to improve your experience while you navigate through the website. Out of these, the cookies that are categorized as necessary are stored on your browser as they are essential for the working of basic functionalities of the website. We also use third-party cookies that help us analyze and understand how you use this website. These cookies will be stored in your browser only with your consent. You also have the option to opt-out of these cookies. But opting out of some of these cookies may affect your browsing experience.
Necessary Always Enabled
Necessary cookies are absolutely essential for the website to function properly. These cookies ensure basic functionalities and security features of the website, anonymously.
Functional
Functional cookies help to perform certain functionalities like sharing the content of the website on social media platforms, collect feedbacks, and other third-party features.
Performance
Performance cookies are used to understand and analyze the key performance indexes of the website which helps in delivering a better user experience for the visitors.
Analytics
Analytical cookies are used to understand how visitors interact with the website. These cookies help provide information on metrics the number of visitors, bounce rate, traffic source, etc.
Advertisement
Advertisement cookies are used to provide visitors with relevant ads and marketing campaigns. These cookies track visitors across websites and collect information to provide customized ads.
Others
Other uncategorized cookies are those that are being analyzed and have not been classified into a category as yet.
SAVE & ACCEPT
Loading Comments...
%d bloggers like this: