“At 11.58, I crouched by the church door, a door I’d passed through every Sunday as a child. I cradled my phone in both hands, waiting for the announcement that would be posted at midday. For months I’d been working on the novel I’d half-written over several years. I’d left my job to finish it, but the wave of optimism that carried me as I wrote for those first weeks had begun to wane.

“When I entered the Bath Novel Award it gave me a sense of purpose – a deadline, a competition, the chance to see if my work was actually any good. By then I’d had my first rejections – useful, definitely, but painful, too. Inevitably, my confidence wobbled as I considered exactly how reckless I’d been, giving up a good job with nothing more concrete than a half-finished manuscript. I was lucky to have a husband who could cover the bills for a few months (as I had done for him when he re-trained) but this wasn’t an arrangement we could sustain. So, as I leaned against the door’s cold wood on that chilly May morning, I was sad, filled with the sense that perhaps dreams must always remain in the realms of fantasy. The numbers on my phone clock changed: 12:00. I tapped on the screen and held my breath.

“When I saw Entanglement on that long list of titles, my first thought was to check again. I must have imagined it, the sheer force of my wanting bending the words I was reading. But no, there it was. I leapt up, started running and didn’t stop until I reached home. That early vote of confidence was enough to keep me going. Many months later, after several more rejections, some very helpful advice and a massive re-write I found my way to Sophie Lambert at C+W. Shortly after that, Entanglement was bought at auction by The Borough Press and published in March this year.

“The Bath Novel Award is more than a competition: it is a community that continues long after the judging has finished, championing and encouraging new writers. I am hugely proud to have been part of the 2016 cohort and very grateful for the ongoing support from #teamBNA – officially the loveliest bunch of people on Twitter. I don’t know what I was expecting that day as I waited, nor why I chose to wait by the church I have long since stopped attending. But I’m glad that I did. It feels fitting that I was crouched in that doorway – the threshold between belief and unbelief – at the moment I first began to have faith in myself as a writer.” 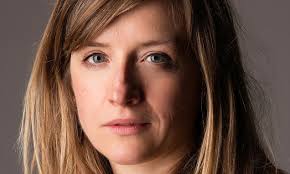 Katy Mahood was born in 1978. She has degrees from Edinburgh University and Oxford University, where she held a scholarship and an award from the Arts and Humanities Research Board. After a brief career in publishing, she has since worked in marketing, most recently for the cancer charity Maggie’s. In 2013, she was awarded an alumni scholarship from St Hilda’s College, Oxford for an independent project on health and architecture. She has contributed to a number of books and written articles in the architecture and health press. She lives in Bristol with her husband and two children. Entanglement (Borough Press March 2018) is out now in hardback and kindle edition.

Entanglement opens on the platform at Paddington rail station in 2006 as Stella and John await their train to Cornwall. Across the concourse, Charlie is watching. What unfolds is the “captivating” story of the 30 years leading up to this moment as, unknown to them all, the paths of these two families cross over and over.

“The idea behind Entanglement fizzed away in my head for years. It’s a story about the extraordinary nature of everyday lives and the resilience of hope, even in dark times. I’ve always been fascinated by the way in which, particularly in the city, people’s lives can overlap and influence one another long before they meet.”

“Being long-listed for the Bath Novel Award made a huge difference to my own confidence as a writer in making me believe that literary professionals rated my work and were interested in the story.” Twice longlisted Annetta Berry signs with Sophie Lambert

“The Bath Novel Award was such a crucial step on the way to publication for me.” Book deal news for 2016 longlisted Elisa Lodato